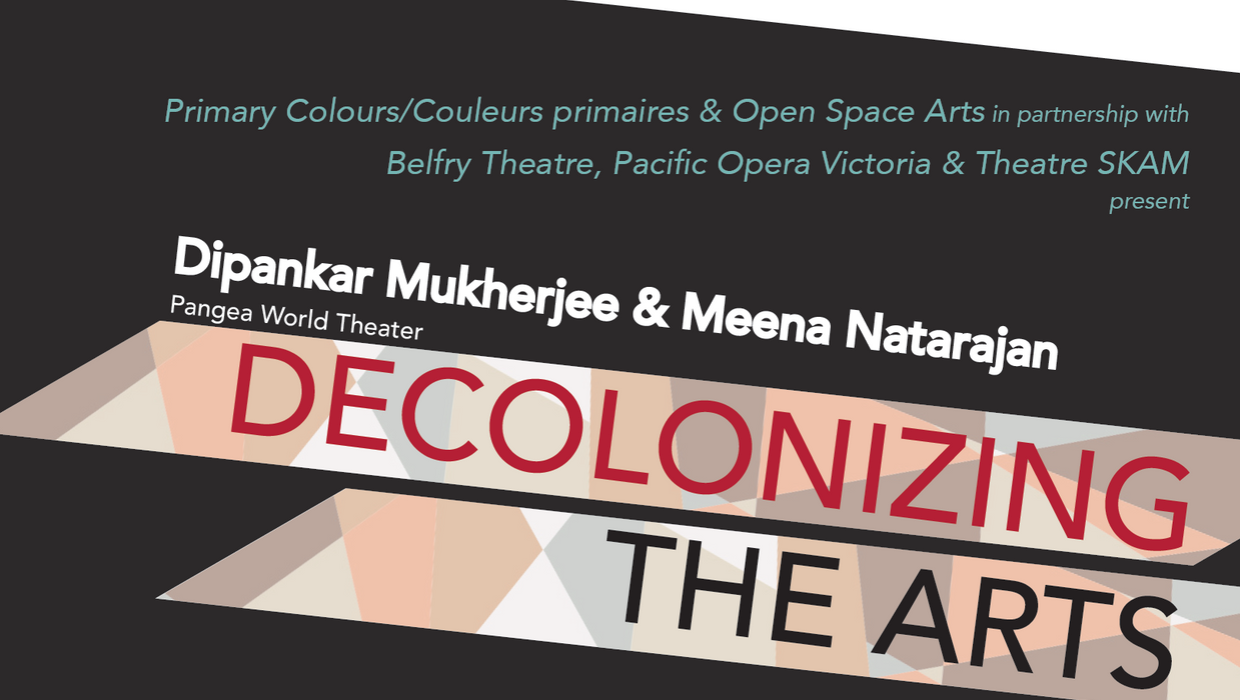 Primary Colours/Couleurs primaires and Open Space have partnered with the Belfry Theatre, Pacific Opera Victoria & Theatre SKAM for this workshop.

This workshop is free and open to everyone – registration is limited to 30 persons. Please wear loose clothing.

To register and for further info please contact: pccpinformation@gmail.com

Dipankar and Meena will also lead a roundtable discussion in Victoria with Chris Creighton-Kelly & France Trépanier of Primary Colours/Couleurs primaires. This roundtable will be followed by small group conversations.

This roundtable is free and open to everyone.

For the whole month of March 2019 Primary Colours/Couleurs primaires, Open Space, Tah’lum Indigenous Artists Collective and ProArt Alliance presented Sche’chulth: Decolonizing the Arts in Victoria – a series of events designed to engage the entire Victoria arts community in conversation leading to actions which will begin a process of decolonizing artists’ practices, arts organizations and arts funding bodies. Many persons expressed the desire to continue this work.

So, in response, we have invited two theatre pioneers, Dipankar Mukherjee and Meena Natarajan of Pangea World Theater in Minneapolis, Minnesota. Since its inception in 1995, Pangea World Theater has worked with artists from many Indigenous, Black and People of Colour (IBPoC) communities locally, nationally and internationally to create works for the stage. As they proudly state:

About Dipankar and Meena

Dipankar Mukherjee is a professional director originally from Calcutta, India with a 25- year history of directing. He is the Artistic Director of Pangea World Theater, an international theater in Minneapolis that is a progressive space for arts and dialogue. As a director, he has worked in India, England, Canada and the United States. Dipankar has worked at the Guthrie Theater, Great Lakes Shakespeare Festival, New World Theater, Alliance Theater and at the Young Vic in London. Dipankar has worked with dancers to create cross-cultural work using his knowledge of Kalaripayattu, an Indian martial arts form. He has worked with choreographer/dancers from India, U.S. and Canada in the capacity of a director. His aesthetics have evolved through his commitment to social justice, equity and deep spirituality and these factors, along with a response to relevant politics, forms the basis of his work. Dipankar has been awarded the Twin Cities International Citizens Award by the Cities of Minneapolis and St. Paul for contributions in the area of human rights and international co-operation. Dipankar has received the Humphrey Institute Fellowship to Salzburg and has been a Ford Foundation delegate to India and Lebanon. He is a recipient of the Bush Leadership Fellowship award to study non-violence and peace methodologies in India and South Africa and a Doris Duke Fellowship at Shangri-La. He co-taught a week-long masterclass on ensemble building using Pangea World Theater’s methodology at PA’I Foundation in Hawaii. He also co-facilitated a workshop process that invoked the comparison between Indian and western theater practices at the South Asian Center in Vancouver, Canada. Dipankar facilitates processes that disrupt colonial, racist and patriarchal modalities of working and collaboratively searches for an alternate way of working.

Meena Natarajan is a playwright and director and the Artistic and Executive Director of Pangea World Theater, a progressive, international ensemble space that creates at the intersection of art, equity and social justice. She has led the theater’s growth since it’s founding in 1995. Meena has co-curated and designed many of Pangea World Theater’s professional and community based programs. She has written at least ten full-length works for Pangea, ranging from adaptations of poetry and mythology to original works dealing with war, spirituality, personal and collective memory. Her play, Etchings in the Sand co-created with dancer Ananya Chattterjea has been published by Routledge in a volume called Contemporary Plays by Women of Color: The Second Edition. Meena leads ensemble-based processes in Pangea that lead to works produced for the stage. She has also directed and dramaturged several original theater and performance art pieces. She is currently on the board of the Consortium of Asian American Theaters and Artists and is on the advisory committee for the Community Arts Program at the University of Minnesota. Until recently, she was a National Theater Project Advisor at New England Foundation for the Arts. She was on the Advisory Committee of the Community Arts Network, was on the founding board of the Network of Ensemble Theaters and was the president of Women’s Playwrights International. She has been awarded grants from the Theatre Communications Group, Playwrights Center and the Minnesota State Arts Board. She was recently awarded the Visionary Award for mid-career leaders from the Minnesota Council of Nonprofits.